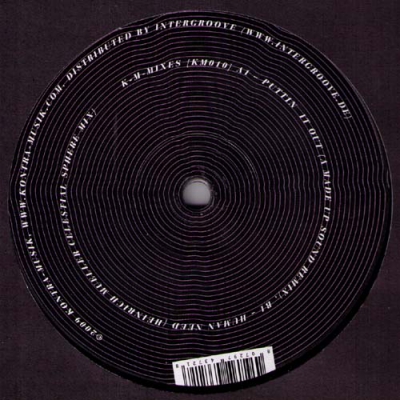 A Made Up Sound & Heinrich Mueller - Kontra-Musik-Mixes

The Kontra-Musik 10”-remix series aims to move the label in new and different directions. Last time Marcel Dettmann and Scuba reworked Agaric and One. To break down and rebuild two more Kontra-Musik tracks, we this time invited tech and dubstep producer A Made Up Sound together with electro master mind Heinrich Mueller. The originals are taken from the exquisite Jason Fine album; Our Music is a secret Order.

First out is A Made Up Sound aka 2562 with a remix of the track Puttinʹ It Out. In the hands of A Made Up Sound, the original is turned into a jazzy off beat techno affair that will work both dance floors and living rooms - just like all great dance music should.
On the b-side, Heinrich Mueller, as so many times before, make great music out of celestial harmony, melody and arpeggio rhythm. Here harmonic elements so typical for Dopplereffekt, meets the funk of early 80-ties disco. Mueller once again moves into new territory – and we follow.
A Made Up Sound aka 2562 normally releases off beat techno or dubstep on labels such as Subsolo and Tectonic. Typical for his sound is mind blowing bass, massive production and ground breaking funk.
Heinrich Mueller is one of the more mysterious units of the contemporary electronic music scene. Scientist Mueller has under aliases such as Dopplereffekt, Drexciya, Arpanet, Japanese Telecom and der Zyklus, contributed to the development of electronic music for almost two decades. We are honored. -Kontra