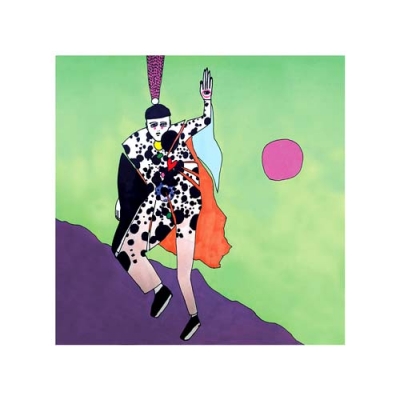 It is with much excitement that NNA presents ‘They Sell Doomsday,’ the latest full-length album from songwriter & producer Ryan Power. As evidenced by his previous work with NNA and beyond, Ryan Power has spent most of his life immersed in the  many realms of music creation. ‘They Sell Doomsday’ is his seventh full-length album, and with dedication to one’s craft comes refinement and mastery. In many ways, this is Power’s most ambitious recorded statement yet, combining the musical palettes of his previous work with explorations into uncharted territories, plus his quintessential attention to sonic detail and innovative lyricism.

In addition to the uniquely colorful electronic environments developed on his previous two albums, Power more prominently integrates his natural talent and foundations in jazz guitar into the mix – smooth solos and tender acoustic pluckings find their homes comfortably in the beds of lush synthesizer chords and metronomic drum machines. While ’They Sell Doomsday’ provides plenty of the perfect, silky pop hits that Power is known for on tracks like “The Cavalry” and “Lazy About Love,” it also contains some of his most complex, challenging work to date. Ryan is fearless in mining the weirder, more demented corners of pop songwriting as the modern world around us follows suit. Songs like “In a Tizzy” or “Issues” at moments sound like looking into a funhouse mirror through a kaleidoscope, with complex lyrical patterns bisecting a Rubik’s cube of melodic shifts, all while somehow being tethered to reality by a steady pulse. Power’s deep exploration of melody and chord changes are pushed to the brink of chaos, creating musically Cubist puzzles that splinter off in unpredictable directions, only to effortlessly land back where they started. Amidst all the hysteria, however, is a foundation of the gorgeous, jazz-influenced chord progressions that define Power’s sound. The common thread across all of the album’s songs which makes the bizarreness so palatable is his ingenious use of melody, even in the most unexpected places, taking the listener on a chromatic merry-go-round of pop songs.

The lyrical themes of ‘They Sell Doomsday’ touch on the building blocks of our contemporary human existence – the future, the past, romance, purpose, human nature, technological mayhem, cerebral disarray – all sifted through the sardonic mind of Ryan Power, and delivered in lyrically beautiful, often cryptic poetics. While perhaps more conceptual than previous albums, the lyrics on ‘They Sell Doomsday’ also show maturity through self-awareness – of fears, faults, both personally and societally. Power continues to muse on the joys and pains of love, desire, and the inherent duality of their conflicting biological and mystical tendencies. He also touches on the paradoxes found in life’s current social climates, and the struggle to maintain a peaceful isolation from the technological and media frenzies while simultaneously not being categorized as unaware or apathetic. These themes are conducted fluidly through Ryan’s often tongue-in-cheek writing, using abstraction and wordplay in a way that feels less journalistic and more stream-of-consciousness than his previous work.

The highly personal nature of Ryan’s music is reinforced by the fact that the final product is entirely self-built, and his presence in all aspects of it’s creation can not only be heard, but felt as well. This record is the definitive statement of a practice and craft refined by it’s creator through passion and time. It is not an album that someone would make for their first, or even their fourth, full-length; this is the work of a highly developed musician in full control of their vision. The perfect storm of high-quality, inventive writing and production make ‘They Sell Doomsday’ a milestone in Power’s discography. -NNA Tapes