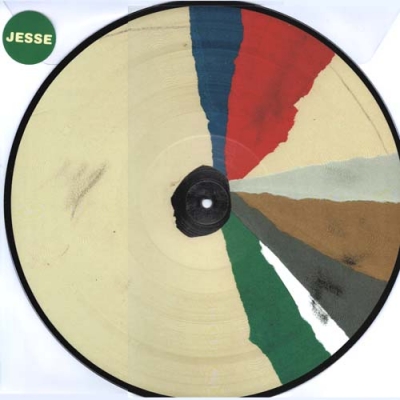 ==PICTURE DISC==
Finnish band Jesse makes unsentimental and innovative music. What you hear on “Fluids”, released as a picture disc LP on Höga Nord Rekords, is the sounds of four creative brains’ journey into the music universe of the future. Their music is influenced by earth and space – Jesse’s astral and cosmic disco is prospective, totally boundless, and vibrant of life and blood. The production sounds luxurious and helps the psychedelic qualities to shine through the sound. Jesse, who with their first releases some ten years ago played fast and arrogant synth based music, now picks up influences from afro beat, funk and ambient but they’ve kept the electronic core of their sound – simple chord structures rest upon cool synthesized waves of sound, like a glider carried upwards on the thermals between the summits of the Andes. Soft, pliable and mighty! Jesses music is dreamy but not unworldly and one thing that makes them special is their ability to place the listener on the edge of their safety zone. There, in the frontier, they explore the possibilities of cross over music.  -H.N.