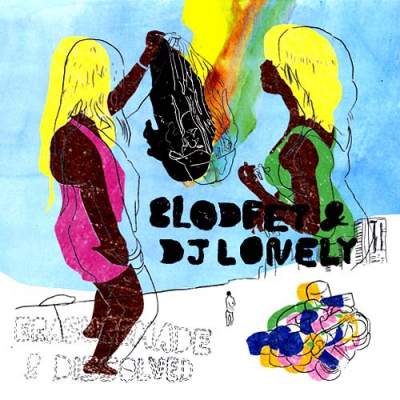 Blodfet & DJ Lonely is a one-headed musical duo by Swedish born Amsterdam based artist, DJ, musician, curator, art teacher and globetrotter Jonas Ohlsson.
He started to make electronic music back in 1988 with Kai Parviainen (Enema Syringe) in Enema & Gejonte, and released his solo debut as Blodfet & DJ Lonely on Börft records with the Ride the Dysfunctional Beat LP in 2003.

The idea to release a new Blodfet & DJ Lonely first appeared during an informal residency of Jonas Ohlsson the D.A.S. Rooms in Berlin. For 3 weeks we lived together, playing gigs and making studio recordings. Before meeting Jonas we knew his music, but the residency sealed the decision to release our first LP on vinyl.
Back in the Bijlmer, Amsterdam Southeast, Jonas reworked and expanded the material, recording new tracks with and without special guests. We got them mastered early in 2014 and progressively realized the oddly badass beats balanced intimacy of this album. From laconic loneliness to caricatural anger, Erasuremade & Dissolved delivers dysfunctional songs and a really unique approach to electronic music and song writing.  -DAS