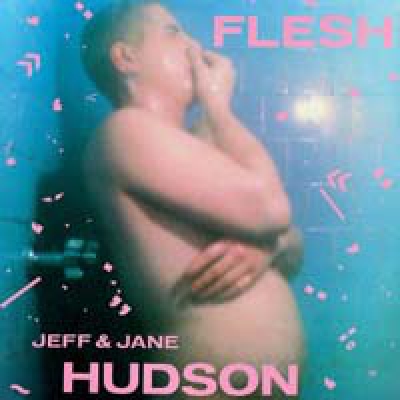 Dark Entries and Captured Tracks have teamed up to re-issue the debut album Flesh by Jeff & Jane Hudson expanded with an extra LP of singles and EP material. Jeff & Jane Hudson are a husband/wife duo from Boston who got their start in the art punk band The Rentals in 1977. The Rentals broke up in 1980 and Jeff & Jane relocated to Manhattan where they opened for Suicide and quickly signed with No Wave label Lust/Unlust. Their first single No Clubs was released in late 1980 and showcased a lo-fi avant garde all synthesizer band. The World Trade EP came next in 1981, expanding their brand of post-nuclear electronic pop. Their vocals qualities were distinct; Jeff quivery and drug-addled while Jane more detached and icy.
The duo reached their pinnacle with 1982′s seminal Flesh. Perhaps one of the United States biggest achievements in the entire “synth” movement of the 80s. The music was electro-pop employing early Roland synths and the TR-808 drum machine. Jeff’s lyrics flirted with technology and politics, while Jane wrote about cultural and psychological situations. Completely self produced by the band, the record has since been oft-cited as a groundbreaking and pivotal LP of the post-punk era, who’s original copies are now heavily coveted by collectors. Completing the discography is the Special World 7″ released in 1983 before the band emigrated back to Boston and stopped recording and performing.... -Dark Entries