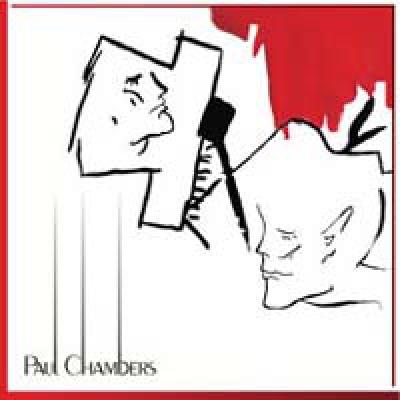 “Stations/Absorptions” is a comprehensive LP+CD set by PAUL CHAMBERS hailing from the UK and being known for his contribution of the two stunning tracks “Steering Solo” and “Take a Ticket” to the “The Apprentices Dance” LP compilation from 1981 (on US label Sounds Interesting Records, SILP 007). These two tracks, full of Roland CR-78 action and analogue synths, made Anna really want to track down Paul, thus in-house detective Jochen Lange was once again called into action and dear Paul couldn’t hide in obscurity for much longer. PAUL CHAMBERS was truly a pioneer of dark minimal electronic music, starting to record already in 1978! He used a Boss DR-55, Roland SH-1, Korg MS-20 and EDP Wasp, just to name a few, and it’s nothing but pure analogue synthesizer bliss with lots of emotional undertones and the pure honesty of an independent do-it-yourself artist. The LP “Stations” comprises 12 tracks including the majority of his rare vocal tracks (thus also including “Steering Solo” and “Take a Ticket”), recorded between 1979 and 1983, which mark milestones of the minimal electro wave genre while not knowing any boundaries: there is incredible lead synths on “In Tune with the Infinite” or “Mood Two”, noisy guitar accompaniment on “The Appointment with Fear” or a distant distorted lead guitar in “Mood Three”, a certain softness in “You are Time” and “Crazy Lazy”, a sequencer madness in “J 2”, a rather mystic atmosphere in “Never is just a Word” and an icy thrill in “Title Name”. The CD “Absorptions” comprises instrumental and more experimental tracks recorded between 1978 and 1981, which can easily be lined up with the recordings especially by Chris Carter/Throbbing Gristle and The Human League from around the same time, while Paul also acknowledges the influence of Fad Gadget, John Foxx/Ultravox, early Roxy Music, Brian Eno, Gary Numan/Tubeway Army, The Normal, Genocide, Cabaret Voltaire, Suicide, Chrome, Cluster, Yellow Magic Orchestra, Thomas Leer and Robert Rental. The really incredible restoring of very old and very noisy audio tapes and the mastering (or as we called it later on … ‘the magic’) was done by Ton Willekes, to who we owe a deep debt of gratitude. Also, Ton got Anna in contact with the talented artist Jen Clark whose works formed the basis of all artworks in this production, which was – as always – patiently and accurately designed by Steve Lippert. This is a rare merging of individual creativity to one almost perfect whole. Music-wise, finding Paul and unleashing his archives was truly a revelation, so that a total of 28 raw minimal experimental electronic wave tracks from the very early days of home-recorded synthesiser music are now finally seeing the light of day after 30 years time! Paul, this is for you! Lim Ed 500x -Anna