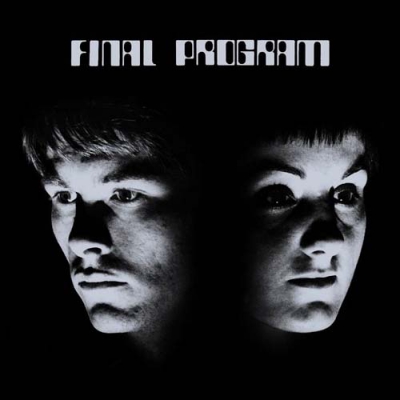 FINAL PROGRAM was a pioneering Scottish minimal synth band, formed in Stirling in 1978. The first version of the band consisted of Richie Program and Anne Droid who went fully electronic when EDP launched their first affordable synth, the Wasp, and guitars were ditched. In 1981 they released the instrumental 7"EP "Protect and survive" which was also played by John Peel causing it to sell out rather quickly. When Anne left the band, Kennie J. Young was added as a vocalist and Al Robertson joined for a while but went on to form 100% MAN MADE FIBRE. Richie and Kennie toured around Scotland and recorded a 12 track vocal demo album which as other efforts did not lead to signing a deal with a record company. Richie joined forces with Sean Kelly and John Sharp from THOSE FRENCH GIRLS and they formed SEAN NOVAK who released one 12" in 1984 when FINAL PROGRAM eventually disbanded. Richie still records today under the HELM OF AWE moniker and runs Voltage Control (manufacturer of t-shirts, hoodies, record bags, wallets and mugs featuring graphic images of vintage synthesisers and original designs). This LP entitled "Robots, Rockets, Radiation" is comprised of all 12 demo tracks and the original 7"EP tracks, making this a rather comprehensive work. Pure and raw, yet playful analogue synth bliss... -Anna