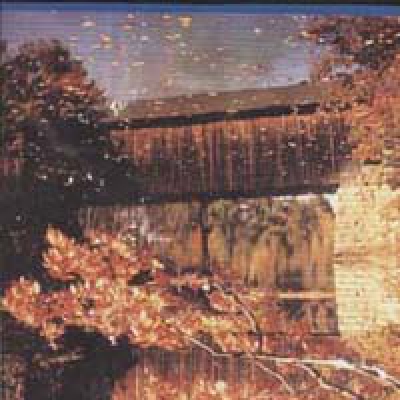 co-released by ZEIKZAK, KING FONDUE, VEGLIA and TAPED SOUNDS. this lp is a concept album about the life, energy and being of Babb's Bridge, a beautiful 19th century bridge in Windham, Maine, USA. surrounded by a misty fairytalish spirit stream, the Presumpscott River, the bridge breaths proudly and gently since 1843. Babb's Bridge has transported tourists, canoers, settlers, founding fathers, forest workers, hikers, and lovers to a new path, a pledge. the record itself is a 2 years in the making singular masterpiece of the modern tongue of the collagist. Skot Spear, the being behind the Id M monikker, has created a both retrohistorical and futuristic trip into a world of voice, tape, computer, sampling, and objects. a stream of energy, enbodied in a composition of both multitracked and direct recorded tunes. fans of e.g. Al Hansen and Crank Sturgeon will linger hapilly in this cosmos of sound. after a continuously high quality stream of releases on cdr, cassette, 7", dvd-r etc, this is Skot's first solo outing on a permanent full lenght format. a debut lp as you might want to call it....the lp comes in a full color cardboard jacket with a picture of the myth / bridge on the front, and paste-on handwritten text artwork by Skot on the back.