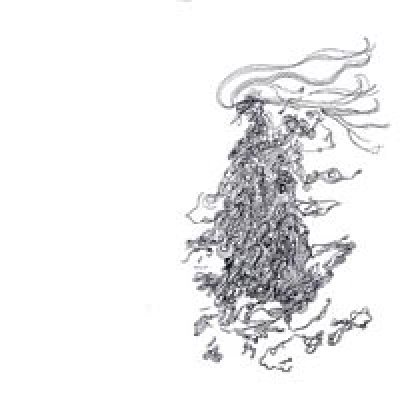 TAURPIS TULA - Cadillac Sitting Like a Ton of Lead

Cadillac Sitting Like A Ton Of Lead, the brand new album from the Taurpis Tula trio of David Keenan (Tight Meat Duo), Heather Leigh (Scorces/Dream Aktion Unit/Jandek) and Alex Neilson (Tight Meat Duo/Directing Hand/Jandek/Richard Youngs et al), represents the absolute apex of their twin guitar/drums incarnation, with two side-long improvised psychedelic blues that combine the kind of epic string-muscle of Fushitsusha, Ohkami No Jikan, Kousokuya and Rallizes Denudes with a sublime avant-garage sensibility and massive pockets of time-killing freedom. Further amplifying the malevolent narcosis of their debut LP on Eclipse, Cadillac… is a full blown rock record that full delivers on their vision of Yoko jamming with Red Transistor in a world where the conventional middle-brow ‘canon’ is pretty much upended in favour of primitive avant garde brut. There are grooves here that are as magnetic and future-visioned as The Magic Band circa “Big Eyed Beans From Venus” or the final seconds of amplifier meltdown on Mainliner’s Mellow Out while the playing is at an all-time ESP-channelled high, with the group generating glorious metal-inflected simultaneities without the slightest whiff of ‘dialogue’ or even listening with ears.This is a profound statement of the kind of freak-out freedoms inherent in the most primal blues/rock forms and a revitalising connection to the source of *it*, further building on the kind of form the group were packing during their monstrous jam at Thurston Moore’s Nightmare Before Christmas. Lim Ed 440x -Ikuisuus