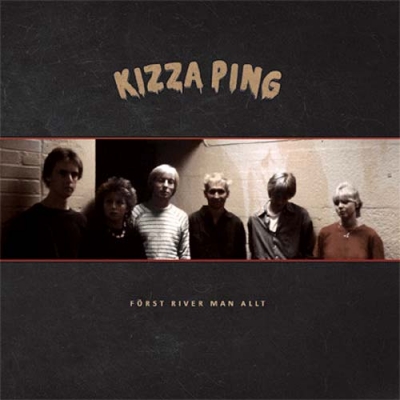 Kizza Ping formed in Linköping 1980 from the ashes of local punk bands such as Spy, RAS, ÅOBF and Zpamhead. Much in line with the current strains of Ny Våg/postpunk happenings around the country in the early 80's, the six members of Kizza Ping went for more a pop-oriented sound though still being somewhat firmly rooted in their DIY punk past. Influences came from acts like New Order and Reeperbahn, but the band added their own touch to the sound, especially thanks to the harmonizing duo-singing from vocalists Annette and Helene. In the autumn of 1981 the band recorded 'Männen' and 'Lär I Tid' which ended up on Kizza Ping's only release, a 7" pressed in 600 copies on the local label Dåvhjort Records. The 7" received great reviews and the band did several out-of-town shows in cities like Göteborg, Gävle and Västerås. All band activities came to a grinding halt in 1982 and no one seems to remember why. Before disbanding, the band entered the studio Bosse Sound for a final session. Först River Man Allt includes the Dåvhjort 7" as well as 7 previously unreleased tracks, everything non-chronologicaly and carefully sequenzed to work as a proper album. The final result is a varied yet cohesive slab of Swedish underground music/outsider art with rough, half-raging kicking against the pricks anthems like 'Liten' and 'Svikers' that reeks of communal youth recreation center boredom and more polished, late-era concrete jungle jewels like 'Tackar Och Tar Emot' and 'Den Nya' that you can't believe that a pack of 17-19 year olds from Linköping in Östergötland were responsible of.

Pressed in 300 copies in a matte sleeve with printed insert including photos, gig list and liner notes by Peter Kagerland. - F.A.