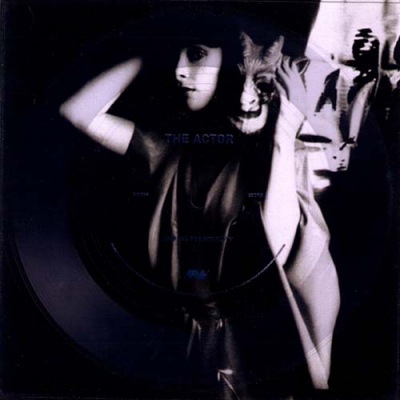 The Actor is a well known but simultaneously quite obscure minimal wave project that emerged from the Dutch home taping scene of the early 1980s. The duo was formed by Marcel Reimer (vocals, keyboards) and Sander Horsthuis (keyboards) in Breda, The Netherlands in late 1981. Influences were DAF, Soft Cell, Depeche Mode and Fad Gadget. Guitars were no option, “because the amplifiers would mar the stage.”

The Actor caught the attention of cult cassette label Trumpett through their powerful live act and were signed to the label in April 1982. Their first, self-produced album was released in September 1982 as ‘Exploded View’ (an exploded view of a cassette tape was featured on the sleeve): Ten quite simply arranged synthpop tracks that were dynamic and danceable, with lyrics sung both in English and German, relating to the modern world, fashion, dancing, fame, appearance and self-image. The edition of 400 copies sold out within six months.

The track featured on this flexi-disc, ‘Unreal Personality’, is the opening track of ‘Exploded View’ and the archetypical The Actor song, with lyrics directly referring to the band’s name. The song was recorded during the summer of 1982. The music and lyrics were written by Marcel Reimer. The song was played and produced by Marcel Reimer and Sander Horsthuis. The equipment they used was the Korg MS-20, Crumar Performer, Casio VL-Tone, and Soundmaster SR-88 drum machine. It has been remastered from its original analog source tape for best possible sound reproduction.