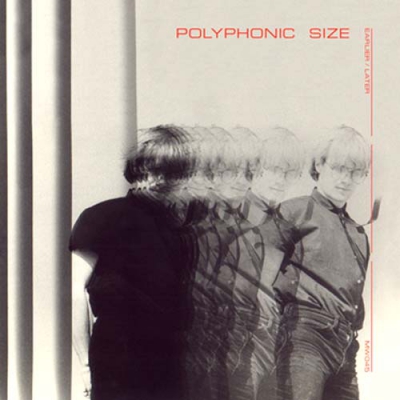 We are pleased to present an LP of selections from the prolific Belgian synthpop band Polyphonic Size. Headed by Roger-Marc Vande Voorde, Polyphonic Size formed in 1979. In December of that year, they released their first record, the Algorhythmic EP on Sandwich Records, an independent label founded by Michel Lambot. After a second EP (Pragmatic Songs), Roger-Marc got in touch with Jean-Jacques Burnel, who offered to produce the next single, Nagasaki Mon Amour. This first musical collaboration was followed by many others, including an outrageous and robotic cover of the Rolling Stones’ classic, Mother’s Little Helper. After several line-up changes, the band finally consisted of Roger-Marc Vande Voorde (vocals, guitar, keyboards, electronics), Kloot Per W (bass, vocals), Martine Bourlée (vocals, percussions) and France Lhermitte (vocals, percussions). Dominique Buxin wrote nearly all the lyrics, but never appeared live on stage or on any record sleeve. Although Polyphonic Size and JJ Burnel were very close to each other, the band always kept its own personality, which was less dark and more European than the Stranglers. On April 3, 1981, Polyphonic Size gave their very first concert at the First Belgian Rhythm Box Contest, in Brussels.
The Earlier / Later LP are remastered selections, curated mainly from Polyphonic Size’s early output as a band, from when they formed in 1978 to when they began working with JJ Burnel in 1980. The tracks on side A represent their early period were recorded between 1978-1980 and the side B tracks, recorded between 1980-1982, are representative of how their sound evolved whilst working with a producer. The LP is pressed on transparent red 180 gram vinyl, housed in a heavy printed sleeve with text overlay printed on a clear vinyl outer sleeve, and limited to 999 hand-numbered copies. -MW