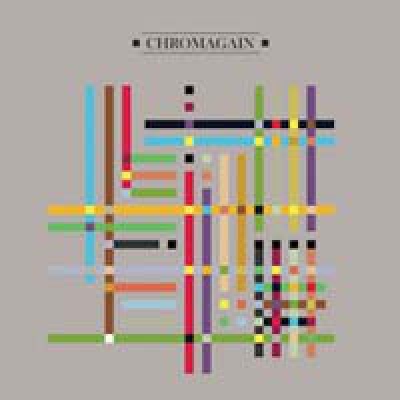 CHROMAGAIN - Any Colour We Liked

… is the highly anticipated and Anna’s first release in co-operation with the Mannequin label from Rome, Italy. CHROMAGAIN were Luca Pastore (bass, guitar, synthesiser, lyrics, backing vocals), Silvio Ferrero (synthesisers) and Davide Bassino (vocals, lyrics) from Torino, Italy, and was formed in 1982. CHROMAGAIN had two other singers (at first Riccardo Acuto, then Danilo ‘Dana’ Barbero) before Davide Bassino joined as the main vocalist and core member. They started as a post-punk outfit in 1982, then evolving to one of the top-notch Italian electronic dark wave bands. The influence of Joy Division/New Order is inevitable, the playful and melodic bass and lots of synthesisers form the backbone to their songs. In 1985 they released their only vinyl mini-LP “Any Colour You Like” (Supporti Fonografici, SF 004; this label was also home of the similar sounding Weimar Gesang) which was recorded at TKS studio together Mauro Tavella and Andrea Costa of MONUMENTS fame, so no wonder you may recognize some similarity (the Simmons drum machine on those recording sessions, DX-7 synthesiser, etc.). The mini-LP had five tracks ranging from the rather most Italian dark wave sounding “Satisfied” to the up-beat track “Spot”, from the dark wave killer “Killing Dome” (oh that bass… this is for the goth clubs) to the hauntingly beautiful ballad “After the Clouds” and finally to their most New Order-ish track “Season of Steel”. “Any Colour You Like” has been a highly sought-after and expensive rarity ever since and a re-issue was more than overdue, so here is “Any Colour We Liked”, a retrospective compilation of CHROMAGAIN’s works: The vinyl version of “Any Colour We Liked” includes the complete and remastered mini-LP “Any Colour You Like”, plus “Wake Up” (a different version to the one previously released on the “Danza Meccanica – Italian Synth Wave 1982-1987” LP/CD compilation, MNQ 005/ITN 012), “Ethnicbox” from the “Tracce” LP compilation (1984, Shirak, CNW 8440) plus a previously unreleased Dub Instrumental version of “Season of Steel” and artwork by Mushy (Valentina Fanigliulo), thus covering their later phase from 1984/85 with Davide on vocals. -Anna