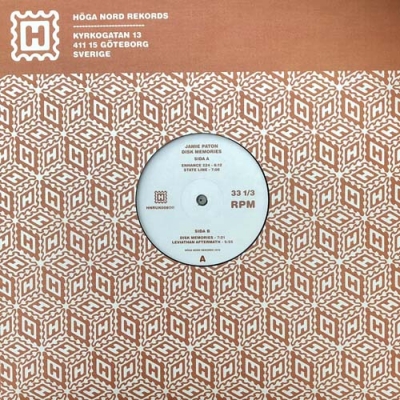 Jamie Paton makes music that loosely skirts between leftfield techno and slo-mo house. “Disk Memories” is his second release on Höga Nord Rekords and finds Paton working in the same spirit as on the previous HNR release from 2017. “Disk Memories” is barren electronic music for the Brexit generation. Paton has established a dystopic electronic sound that aims straight at your frontal lobe, burns in your bones, and projects a lost Europe’s anxiety onto the grey London skies. The music breathes of the cold 1980’s, a time of crisis in England’s history and a vibe to be recognize in today’s society: right-wing winds once again blow hard over the British Isles and Jamie Paton’s music catches the insecurity the wind carries with it. In some ways opening the floodgates to a whole stream of disgruntled, anarcho-electronix surely due to fill the airwaves in this most challenging of years. Like one Mike Smaczylo (from new MCR night, Half Edge) said: 'who the fuck listens to disco in post-Brexit Britain?!'. - H.N.